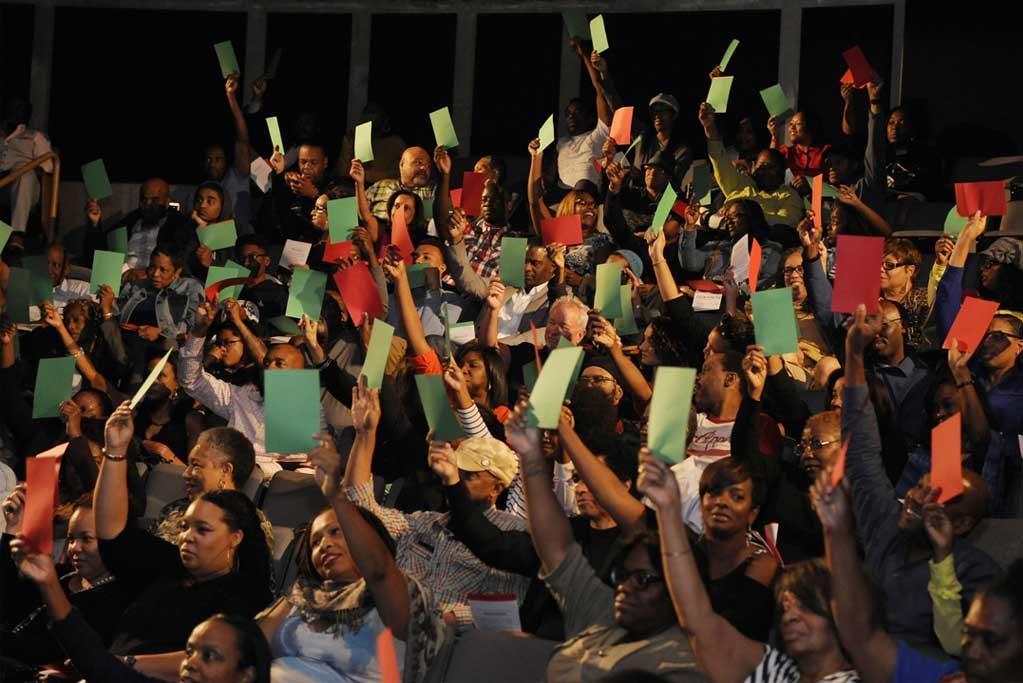 A casually attired young man walking down the street is stopped by police officers convinced his tattoo is gang insignia. Questioning him, they learn he is an undocumented immigrant – a DACA recipient who has never really known another home and who is less than cooperative when grilled about the gang, implicated in a recent death. He is turned over to immigration officials. To defend himself against deportation, the DACA recipient sues the U.S. government on the grounds that the Constitution guarantees freedom of assembly, regardless of an assembled group’s nature — and therefore police had no right to stop him in the first place, nor remand him to ICE.

That is the gist of the timely case set forth during “Trial By Jury: A Case of Deportation” at The Broad Stage on Monday. Audience participation is required during the show, which incorporates elements of reality programs and “Law & Order”-type procedurals while fostering meaty debate. Do non-citizens have constitutionally guaranteed protections? Are they voided by the realpolitik of immigration policy? Can citizens be persuaded to turn away from the echo chambers of pundits and social media, and risk uncomfortable conversation across the divide between fixed ideological positions?

Producer Kyle Bowser, who sold a pilot version of “Trial By Jury” to the UPN network in the mid-1990s, says his intention has always been to “tap into the zeitgeist of what people are thinking or talking about” and spark debate with topical issues that cross into “gray areas of the law.” Unable to transform that
first special into an ongoing series, he eventually decided to revive his concept as a live event.

He’s presented the similarly structured “Trial By Jury: The Case of the N-Word” in several cities over the past two years (including an engagement last year at The Broad Stage). With each show, Bowser says, he hopes for a diverse cross-section of the general public, “thinkers and people who have a certain consciousness.”

The setup for “A Case of Deportation” is fairly simple. A 35-minute film is shown to the audience depicting the DACA recipient’s trial, set in a courtroom with attorneys, litigants and a judge — all portrayed by actors whose lines are scripted. However, the jurors are not actors, and their deliberations are unscripted. Before their verdict is delivered, the film is stopped and 12 people in the theater are selected to deliberate in a nearby room. Meanwhile Bowser, a Philadelphia native with a law degree from Widener University in Delaware, moderates a town hall with the audience, which delivers its own verdict.

Onstage Monday night, he will be joined by commentators with “enhanced insight” to help frame discussion with the audience: Angela Aguirre, co-founder of Latina feminist poetry collective Chingona Fire and one of state Sen. Anthony Portantino’s Women of the Year for 2017; attorney Nathan Hochman, whom Bowser describes as a “more conservative thinker on this issue”; Santa Monica College student Maria Padilla; and Mohammad Tajsar, a staff attorney at the ACLU of Southern California. They will ultimately be rejoined by the live jurors from down the hall, and the film jury’s decision will finally be shown.

Bowser says his goal is to bring together people of varying mindsets and backgrounds and “provoke some open dialogue in the flesh, and not force but certainly encourage people to revisit the tradition of talking to each other and hearing each other, and perhaps finding that even when they disagree they have more in common than they realize.” One element of unpredictability: the ratio of education to opinion. Some audience members arrive “very informed” on the subject matter, pertinent law and news; others bring fervent convictions unburdened by fact.

“I have seen a number of times people change their mind on their position relative to the specific facts of the case,” he says in smooth, deliberate tones. “Now, they may not change their mind in terms of a root position on the issue, but given the specific facts of the case, and given what the law requires of them in terms of making the decision on the case, they often will rule contrary to what they will tell you is their default position. And that’s fascinating, because that’s what happens in jury rooms all across the country every day. It doesn’t matter if you’re a bigot or a racist or a this or a that; the law prescribes that you have to rule between these parameters that have been set.”

Next on the docket after “A Case of Deportation” is “Trial By Jury: The Case of a Love Triangle,” concerning alienation of affection. Bowser says he plans to bring it to The Broad Stage in March. Beyond that, he hopes to produce other “TBJ” shows addressing issues from gun control to gender equality.

“I want to tackle as many of these subjects as we can,” he says, “and get people to come out and be participatory
in the direction of their society.”